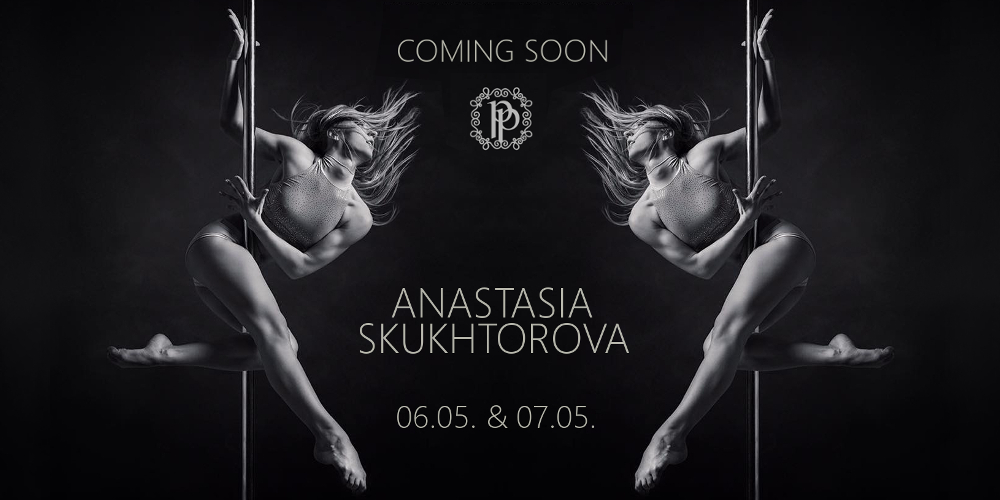 This world-famous pole athlete was born in Moscow. Without ANY experience before (no sport, no dance background) Anastasia began pole dancing when she was 18 years old, in December of 2008. She trained at Moscow School and fell in love with pole dancing with a first class.

In the beginning, this Russian talent, trained 3 days a week for about 6-7 hours. After a couple months, her instructors suggested she become an instructor!! She trained all weeks for many hours, paid close attention to detail with choreography, basic tricks and stretching. Her back flexibility is natural and is extreme! In July 2009 Anastasia began preparing for the first Russian Pole Fitness Championship, which was held in Saint-Petersburg. She won second place in the professional category. But, at the first Russian Pole Dance and Fitness Competition, Skukhtorova won first place!! Next step for her was Russia on World Pole Dance Championship 2010 in Zurich.

She went thru the finals there and was competing on the one stage with amazing Felix Cane and Jenyne Butterfly. What was a historical moment for her. That was a first step to her big trip. After this championship Anastasia started to travel the world with teaching , inspiring, developing pole dance in different countries. She kept working on her flexibility, power and dance skills,Anastasia was taking private lessons with amazing Russian circus artists with aerial silks, ballet, gymnastics, trapeze, contortion and many more.

She put an aim to become one of the best artist in the world. In the year of 2011 she firstly went to one of the most important and artistic competition – Pole Art. That was held in Helsinki.This russian talent took there 3d place. That was a great start. Her video from this competition has more then 4600000 views on YouTube. This is the biggest amount everyone ever had in a polen dance competitions.

But one of the most important things for her was a marvelous winning at 2d pole World Cup in Rio de Janeiro.Her choreographer for this act was Evgeny Greshilov – her partner, her soulmate. Now Anastasia is still traveling the world, inspiring people to believe in them selves.She showed the world that even with no experience but with belief in yourself you can achieve every goal, you can get everything you really want. Hard work, patience , belief in yourself and all dreams can be a reality. 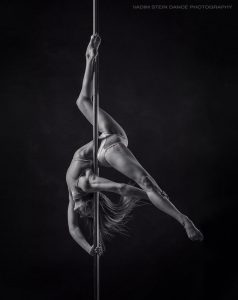 12:00 Uhr – 13:15 Uhr – 75 min. € 90,- pro Person (AUSGEBUCHT)
Pole Tricks & Spins Intermediate Level
This workshop is all about spinning pole. You are going to learn beautiful tricks and transitions that you mayhave seen Anastasia doing in her perform…ances, Instagram, and YouTube videos.

13:30 Uhr – 14:45 Uhr – 75 min. € 90,- pro Person (AUSGEBUCHT)
Power Pole Intermediate/Advanced Level
In this workshop you will work more with power. Different kinds of dead lifts, reverse elbow grips, forearmand arm handstands and smooth transitions into them. All elements you can perform on spinning or staticpoles. A few tricks require flexibility or splits. You do not need to be super flexible to attend this workshop.If you repeat all these exercises a minimum of three times a week you will see a big difference after one-two months.

12:00 Uhr – 13:15 Uhr – 75 min. € 90,- pro Person (AUSGEBUCHT)
Pole Tricks & Spins Advanced Level
This workshop is all about spinning pole. You are going to learn beautiful tricks and transitions that you mayhave seen Anastasia doing in her performances, Instagram, and YouTube videos.

13:30 Uhr – 14:45 Uhr – 75 min. € 90,- pro Person
All About That Drop Intermediate/Advanced Level (AUSGEBUCHT)
This very intense workshop will include almost all of the drops that you may have seen Anastasia do in herperformances or on Instagram. You will learn drops from Russian Split, Back Planche, Teddy etc.